What did the animals eat on Noah’s ark?

Adrian asked a question that I’d never heard before:

If Noah had obligate carnivores (carnivores that must eat meat to thrive) on the ark, what did they eat? I have asked other people and they give me a cliche answer of ‘God told them to eat grass’ or something along those lines. But I don’t think they could survive for 40 nights and 40 days on strictly grass. Since they would die of malnutrition in a short period of time. Thanks in advance.

Thanks, Adrian. The first step to clearing up any confusion is to actually go directly to the source material in question. In this case, it’s the Bible…specifically, Genesis 6. Go read the events surrounding Noah’s ark and you’ll see that Noah was instructed by God to do very specific things. Here’s a quote (verses 19-22):

You are to bring into the ark two of all living creatures, male and female, to keep them alive with you. Two of every kind of bird, of every kind of animal and of every kind of creature that moves along the ground will come to you to be kept alive. You are to take every kind of food that is to be eaten and store it away as food for you and for them. Noah did everything just as God commanded him.

They were on the ark to be kept alive, so Noah brought along not just animals, but food as well. I’m not sure why those other people you asked weren’t able to just look it up, but there you go. Easy peasy.

Thanks for asking, Adrian.

Christianity and the Bible

7 Questions about the Noah Movie

The 2014 movie Noah is clearly The Most Divisive Movie Ever, except for all of the other religious movies ever made. I don’t do movie reviews…but, since so many are asking questions about the theological content in the movie, I figured I’d better get to work. WARNING: SPOILERS. 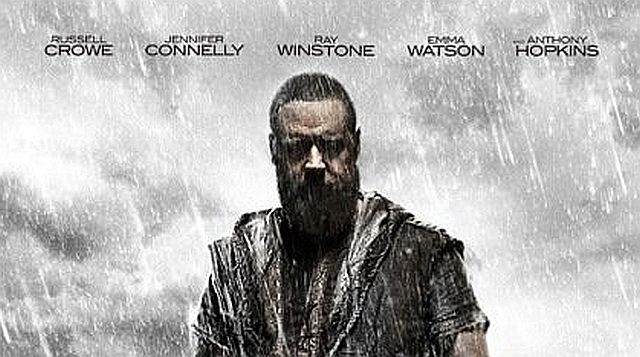 Is the movie Biblically accurate?

No. The Biblical story of Noah is the background for the movie, but the story told in the movie is a composite, created from a number of sources:

…and more. In other words, the movie is an exploration of the Noah story as told throughout history. Not only is the movie not designed to tell the Biblical story of Noah, Director Darren Aronofsky called it “the least Biblical movie ever made”. There are a few places where the movie directly contradicts the text (Genesis 5-9 ).

What’s the deal with the Watchers?

For those expecting the Bible story they heard in Sunday School, one of the most surprising elements of the story is the inclusion of “the Watchers”. Some say that these are just made-up characters designed to make the story cool, but the truth is more interesting than that. The Watchers are found in the Book of Enoch, a pseudepigraphal work. The movie tells us they were disobedient angels, exiled to Earth. The Watchers are redeemed in the end, and ushered back into God’s presence as a result of helping the main characters. Stylistically, they’re a lot like the Ents from The Lord of the Rings.

Are the film-makers trying to undermine the Bible?

No. Co-writers Darren Aronofsky and Ari Handel are Jewish, and they are telling a story. In an interview with Christianity Today, both of them explained that they consider the movie to be midrash. For those who didn’t grow up with Judaism, midrash is a method for interpreting the Tanakh. This traditional Jewish practice attempts to fill gaps in the text to make difficult passages easier to understand.

As a Christian, I’m a Bible guy…so I try to stick closely to the text. I wouldn’t tell the story in this way, but it’s not my movie. Noah tells an ancient pre-Christian story, and doesn’t contain any anti-Christian sentiments at all. If Christians want to tell the rest of the story, they’ll have to make their own movie.

What are the film-makers really trying to say?

It’s clear from the interviews I’ve read that Aronofsky doesn’t consider the story of Noah to be specifically and technically true. That is, he doesn’t seem to consider it an accurate description of actual events. It’s equally apparent that he considers the story to be valuable, and to contain some truth…that is, to convey meaningful messages that we need to hear. Here are a few of those messages:

Environmentalism 101:
The underlying assumption of the movie – both expressed and implied – is that mankind is the source of all bad things on Earth. While on the ark, Noah retells the story of creation…and everything through the first 5.5 days of creation was “good”. Then, we are told, mankind came along and messed it up. While it’s true that some people do all kinds of awful things to other people and to our world, the Biblical account shows that we are part of the “good” in God’s creation (Genesis 1:27-31 ).

Environmentalism 201:
The Watchers gave technology to the descendants of Cain. This was a Very Bad Thing to do, since they then used that technology to create cities and wreck the planet. Technology isn’t the planet’s primary problem, and neither are cities. This is as true today as it was before the flood. The primary problem is sin, which is disobedience toward God, from which all creation still suffers (Romans 8:18-22 ).

Environmentalism 301:
The good guys (Noah and his family) are caretakers for the planet. They wouldn’t even pick a flower unless they needed it for something specific. The bad guys (everybody else) want dominion over the planet, using and abusing nature to suit their selfish and evil desires. The problem with this departure from the original text is that the idea of dominion was God’s: God blessed them and said to them, “Be fruitful and increase in number; fill the earth and subdue it. Rule over the fish in the sea and the birds in the sky and over every living creature that moves on the ground.” (Genesis 1:28 ) That doesn’t mean, of course, that mankind is not to take care of the planet…we surely are. It means that God intended for us to also use the resources that He provided.

Mercy
The idea that man is irredeemable gets an “on the other hand” at the end of Noah. For most of the movie, mankind must be eliminated for the good and innocent (the animals, that is) to thrive. Only Noah’s family is exempt from destruction but, in a pivotal moment of insight, Noah realizes that he and his family are capable of the same great wickedness as everyone else. He concludes that, once the animals are safe from the flood, mankind should be no more. This adds an element of confusion for the viewer. Noah appears to lose his mind at this point in the story, and appears willing to murder to make sure that humanity does not spread beyond the ark. Right before he kills, he seems to come to his senses. His explanation is that he chose mercy instead of justice. Movie-goers are left to wonder whether Noah’s mercy was obedience or disobedience to The Creator.

Yes and No. As movies go, it was pretty good. The movie has an all-star cast, and Russell Crowe and friends did an excellent job. The special effects were generally excellent. I didn’t notice the music, which seems just right…it helped tell the story without drawing attention away from it. The first half of the movie went pretty well, but the second half seemed to drag a bit. There were some directorial decisions that distracted, and detracted, from the story…notably that Biblical Noah’s sons all had wives in the ark, but movie Noah’s sons didn’t. In fact, a major plot point in the story revolves around this issue. Another noteworthy decision was to put a stowaway on the ark. No, it wasn’t a unicorn. It was The Bad Guy.

Would you recommend this movie?

Mostly. It’s certainly not for young children, who might have nightmares due to dramatic depictions of evil. It’s an interesting movie, but not one I’d care to see over and over.

Do you have any reason to NOT see the movie?

Yes and No. While I disagree with the environmentalist message in the movie, and question a few of the decisions to deviate from the text, I don’t see anything seriously wrong with the movie. It could be used as a springboard to in-depth discussion of things like justice and mercy, human nature and original sin, the character of God, and redemption.

At the same time, there is certainly a negative involved with movies like Noah. Many will see the movie and NOT engage in any in-depth discussion. A lot of these people will assume that the elements in Aronofsky’s film are factually accurate, in spite of the fact that the writers never make such a claim. Two recent examples come to mind:

Noah is a pretty good movie, but it’s not awesome. It’s not a Bible movie, and shouldn’t be praised or criticized as though it were.